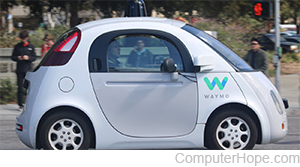 Initially referred to as the Google Self-Driving Car Project, Waymo is a self-driving car project that began development at the X laboratory on January 17, 2009. Waymo has added self-driving functionalities to vehicles from other manufacturers, in addition to developing their cars. Waymo cars are in various stages of development, including public road testing in Phoenix, Arizona and Austin, Texas.

How do Waymo cars work?

Waymo cars work using footage from a 360-degree camera system mounted on top of the car. It then compares the footage to a previously created map of the road, similar to Google Street View.