Define names and use them in Microsoft Excel

Microsoft Excel allows any cell to have a defined name, which makes creating and pointing to that cell a lot easier. For example, in a traditional formula you may subtract the value in cell A1 from B1 using the formula =sum(A1-B1) in cell C1. However, referencing these cells and using them in a formula could be made easier by defining the name of cells. For example, cell A1 could be named total and cell B1 could be named tax, which means the same formula in C1 could be =sum(total-tax) to get the total.

To create a defined name for any cell right-click the cell and choose Define Name, once clicked a New Name window, like the one shown below should appear. Fill out the name you want to use and click Ok. 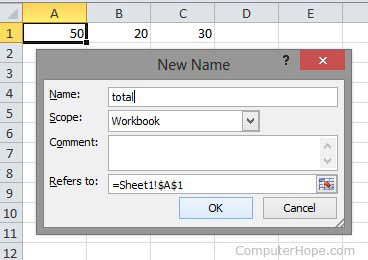 Defining a spreadsheet cell name increases your overall productivity since it's a lot easier to remember a name than a cell reference.