How to make a network cable 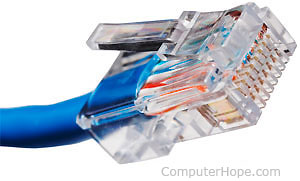 To create a network (Ethernet) cable, you need the equipment listed below.

Once you have the necessary equipment needed to create a network cable, determine the type of network cable you want to create. There are two major network cables: a straight through cable and a crossover cable. Below are examples of which cable is used for each of the examples. 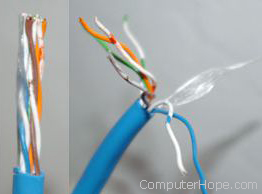 The CAT5 twisted-pair cables consist of four twisted wires, each color-coded; one a solid color, and one a striped color. As seen below, most network cables consist of a green, blue, orange, and brown pair of cables.

After separating the cable ends to match one of the examples above, insert the cables into the RJ-45 connector and crimp (using a crimping tool) the connector. Do these steps for each side of the cable.

Once both ends of the cable are complete, connect the cable to make sure it is working.