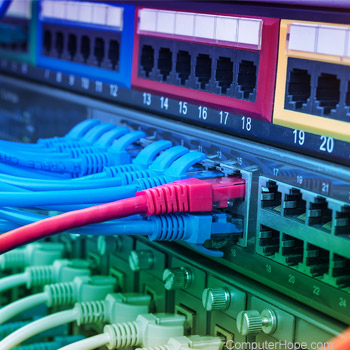 An Ethernet adapter or Ethernet controller describes an Ethernet network card used to connect a desktop computer to a network. If you are looking for network adapter drivers, you can find them on our network drivers page.

How to connect or plug in an Ethernet cable 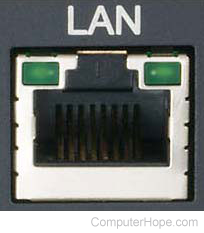 Whether setting up your home network or connecting an Ethernet cable to your computer, the process is the same. Look for what appears to be a large telephone cord jack, similar to the image on the right. Once you've located it, push the cable connector into the port until you hear a click. If connected properly with a connection on the other end, a green LED (light-emitting diode) should indicate a signal is found.

To disconnect the Ethernet cable, press down on the top tab and pull back gently on the connector.

When disconnecting the cable, always pull by the connector, not the cable.

Below is a listing of different standards of Ethernet and additional information about each of them.

Fast Ethernet (100BASE-T or 802.3u) is a communications protocol for sharing data at rates of 100 million bits per second instead of the standard 10 million bps. Fast Ethernet works over category 5 twisted-pair wiring.

Ethernet SNAP is short for Ethernet SubNetwork Access Protocol and is an Ethernet protocol that enables old and new protocols to be encapsulated in a type 1 LLC.

10 Gigabit Ethernet (10GE or 10 GbE or 10 GigE), also known as 802.3ae, is a standard published in 2002 and supports up to 10 Gb/s transmissions. 10 gigabit Ethernet defines only full duplex point-to-point links connected by network switches, unlike previous Ethernet standards. The half-duplex operation, CSMA/CD (carrier sense multiple access with collision detection), and hubs do not exist in 10 GbE.

The 1000BASE-CX is a copper cable gigabit Ethernet standard that is no longer used. This standard was replaced by 1000BASE-T.

The 1000BASE-LX is a fiber optic gigabit Ethernet standard that operates over single-mode fiber.

The 1000BASE-SX is a fiber optic gigabit Ethernet standard that operates over multi-mode fiber with typical distances of up to 550 meters (1804 feet).