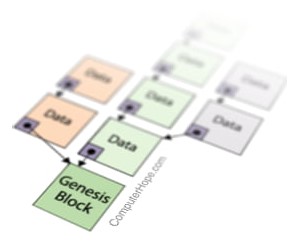 A blockchain is a data structure containing records, called blocks, which are linked together in a cryptographically secure way. It's a distributed, publicly agreed upon ledger of transactions, and the fundamental technology of cryptocurrencies like bitcoin.

A blockchain is a special type of linked list. Each list item contains its own information and a pointer to the next item in the list. When looking for a linked list item, you traverse it one item at a time, using that item's information to find the next item, then repeating the process. This process is a useful way to structure data, partly because you can splice two lists together by changing a single pointer.

Blockchains are a little different because they link backward rather than forward. When a new block is created, it points to the preceding block.

Other characteristics of a blockchain:

Why blockchain is useful

These properties make the blockchain a decentralized, authoritative record of information. For a cryptocurrency, a blockchain permits owners to transfer value to each other without needing a centralized banking institution to broker the transfer.

What's in a block

In general, a block contains:

A fork may be created because a different set of rules is being applied to future transactions, or because new features were added to the blockchain. It's like a fork in the road: the record of transactions proceeds in two different directions.

A fork may also be created retroactively if transaction validity is in question, to proceed from a known valid point in the blockchain.

Temporary forks are a natural side effect of the distributed processing performed on a blockchain. Such a fork may occur when two or more miners finish mining a block at approximately the same time.

When the rules that govern transactions change, a "hard" or "soft" fork may be created. In a soft fork, the new rules are backward-compatible, so new rule blocks are seen as valid by old-rule blocks. In a hard fork, the old and new rules are not compatible, and neither fork sees the other's blocks as valid.

Establishing trust in the blockchain takes a lot of work. To create the chain of trust, participants called "miners" perform the cryptographic "work" to verify transactions in the chain. Miners use their computer's CPU and GPU power to compute complex, repetitive cryptographic hashing functions. The process is called mining because it requires a large amount of distributed work, in the search for something valuable.

Mining requires a powerful computer and a lot of electricity, so there is a significant real-world expense to mine a blockchain. To encourage mining, the system rewards the individual whose computer successfully "mines a block." Miners compete with one another to claim this reward.

What constitutes a reward, varies according to the purpose of the blockchain. In a cryptocurrency blockchain, the miner who solves a block is rewarded with a set amount of the currency. For instance, the bounty for successfully mining a bitcoin block is 25 bitcoins.