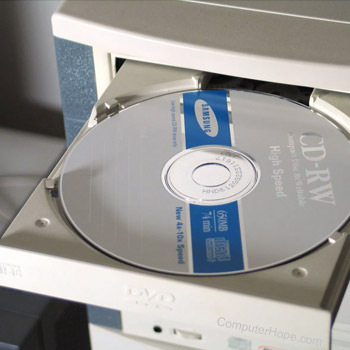 Alternatively referred to as a cd writer, CD-WO (write once), or WORM (write once read many), CD-R is short for Compact Disc-Recordable. It's a writable disc and drive capable of having information written to the disc once and read many times. Data cannot be deleted from a CD-R disc, and a CD-R disc cannot be formatted. If the data is not written to the disc properly, it cannot be corrected and is often jokingly referred to as a coaster.

The first recordable specification CD-WO (write once) was published in 1989 by Philips and Sony in the Orange Book. However, the drives were not popularized until Hewlett Packard released the HP 4020i in September 1995, the first sub $1,000.00 recordable disc drive.

CD-Rs are a low-cost solution for backing up software and only costs a few cents (as of 2018 around 19-cents a disc) and can hold up to 700 MB (80 minutes of music). Although these are still a very popular solution for backing up data, more users are turning to DVD-R, USB thumb drives, and the cloud to backup and transfer data.

How does the CD-R work?

A CD-R disc is coated with a photosensitive organic dye that allows a user to record information. Once the CD-R disc is placed in the computer, the recording process begins. The laser inside the drive heats the dye to reveal areas that diffuse the light like a traditional CD pit. The CD-R drive doesn't create pits on the CD; instead, the burner creates reflective sections on the CD, causing the computer's CD-ROM laser to interpret it as a pit. Once a CD-R disc is finished recording, the CD can be used in any standard CD-ROM, CD-R, CD-RW, or DVD drive. Although there were issues with the first revision DVD drives reading CD-R disc, today's drives no longer suffer from reading problems.