Enigma may refer to any of the following: 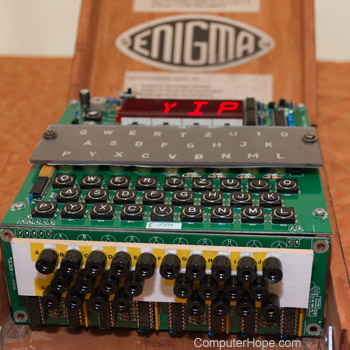 1. The Enigma machine was a cipher machine invented by German engineer Arthur Scherbius at the end of World War I who filed for a patent on February 23, 1918. It was used to encode and decode secret messages for commercial and governmental bodies of several nations, including Germany's Nazi party during World War II. It took input from a keyboard, and used a series of mechanical rotors and electronics to apply a polyalphabetic substitution cipher. Essentially, every time a key was pressed, the way that letters were substituted changed. The machine was eventually reverse-engineered by three Polish cryptologists, which contributed greatly to allied victory in WWII.

2. Enigma was the codename for Red Hat Linux version 7.2.