A keyboard is one of the primary input devices used with a computer. Similar to an electric typewriter, a keyboard is composed of buttons used to create letters, numbers, and symbols, and perform additional functions. The following sections provide more in-depth information and answers to some of the frequently asked questions about the keyboard. 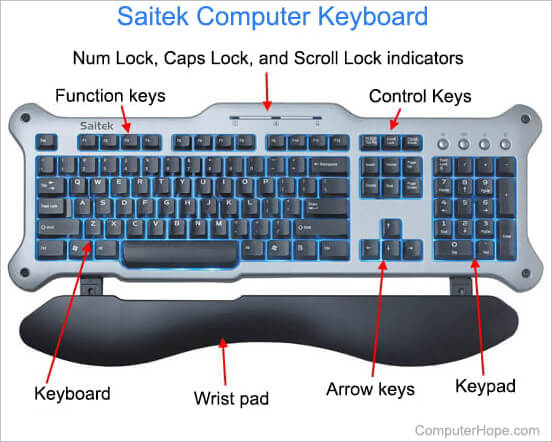 What are the keyboard rows?

The horizontal rows of character keys in the typing area have specific names. For example, when placing your hands on the keyboard, they should be positioned over the home row keys. The keys below the home row are called the bottom row keys, and above the home row keys are the top row keys.

Below is a close-up image of a QWERTY computer keyboard with each of the keys selectable. You may hover your mouse cursor over any of the keys to see a description. Clicking any of the keys opens a new page with full details.

See our QWERTY definition for reasons why the keyboard keys are positioned the way they are. 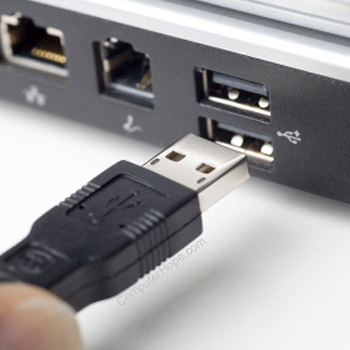 Today, most desktop computer keyboards connect to the computer using either USB or Bluetooth for wireless communication. Before USB, a computer used PS/2, serial port, or AT (Din5) as a keyboard interface.

What else can a keyboard do?

A computer keyboard has many more functions than typing. Below is a list of additional tasks you can perform using a keyboard.

The following section contains information on Apple keyboards and how they differ from their PC equivalents.

The following image shows the standard layout for an Apple keyboard with a numeric keypad.

How are Apple keyboards different than Windows keyboards?

The keyboards used with Apple desktop computers have a nearly identical layout to those used with Windows computers. However, they have a few different keys on both sides of the keyboard's characters section near the bottom: Command and Option.

A laptop keyboard is arranged differently than a desktop keyboard to accommodate the laptop's narrower footprint. Most laptop keyboards are made smaller by placing the keys closer and by including an Fn key. The Fn key is used to give other keys more than once function. For example, pressing the Fn key and the up or down arrow on the keyboard may increase or decrease screen brightness (shown below). Also, many laptop keyboards generally omit the numeric keypad to save space.

Today's smartphones and tablets do not come with a physical keyboard, although one may be purchased as an optional peripheral add-on. These devices utilize a thumb keyboard or on-screen keyboard to type messages and enter text into various fields. The image is an example of the Apple iPhone on-screen keyboard, used on all Apple touch-based devices.

Why is the keyboard an input device?

A computer keyboard is considered an input device because it only sends data to a computer and does not receive any information from it. As you type on the keyboard, you're inputting information into the computer.

Does a computer need a keyboard?

Many users are surprised to learn that a keyboard is considered a peripheral and that a computer can function without one. In fact, if you have a USB keyboard, you can disconnect it now, and you see that the computer continues to work without it. Many servers, like the Computer Hope web server, run almost their entire life without a keyboard and are administered by a remotely-connected user.

What are multimedia keys?

Multimedia keys are those keys that allow the user to control music on their computer keyboard. These keys add functionality, such as play, pause, stop, rewind, fast forward, skip track, eject, shuffle, and repeat for music. For further information on these keys, see our special key page.

What keys appear twice on a keyboard?

The three keys that appear twice on Apple keyboards are the Command keys, Control keys, and the Shift keys. For Apple keyboards with a numeric keypad, there are seventeen duplicate keys. These keys include the equal (=), divide (/), times (*), subtract (-), plus (+), period (.), numbers 0 through 9, and the Enter key.