Hotmail (the capital H, T, M, and L are a homage to HTML) was a free online e-mail service started by Jack Smith and Sabeer Bhatia in 1995. It was later acquired by Microsoft in December 1997. By 2001, Hotmail had over 100 million users and had become one of the most popular webmail services available. It allowed users to read and send e-mail wherever there is Internet access. The following picture shows an example of what Hotmail looked like in 1998. 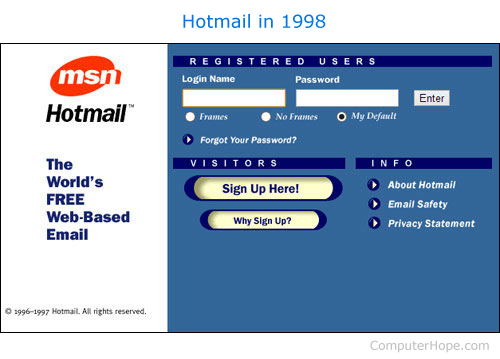 In February 2013, Microsoft announced it is transitioning away from the Hotmail brand and is moving more than 300 million users to the new Outlook.com brand. Although Hotmail no longer exists, all old e-mail addresses remain the same but have the new Outlook online interface.