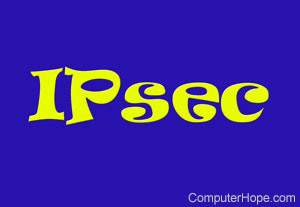 Short for Internet protocol security, IPsec is a set of protocols developed by the Internet Engineering Task Force to support the secure exchange of packets at the IP layer.

IPsec is often used in the implementation of a VPN (virtual private network) and supports "transport" and "tunnel" encryption modes. "Transport" encrypts only the data in the packet, not the header, while "tunnel" encrypts both the data and the header in the packet. When utilizing IPsec, the sending and receiving end of a packet must share a public key. Also, the receiving end must be IPsec compliant to decrypt it.