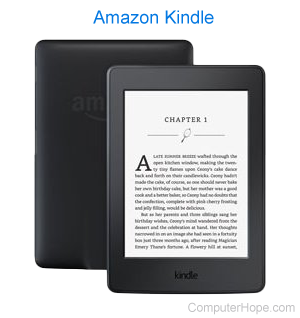 A Kindle is a portable hardware device first released in the United States by Amazon.com November 19, 2007. Kindle displays images and text using E ink and is capable of getting e-books over the Amazon Whispernet using Sprint's EVDO. Users can access hundreds of thousands of books from Amazon.com. The cost is typically less than the paper back version and you can subscribe to magazines, get newspaper subscriptions, RSS feeds, and connect to the Internet with a basic browser.

What makes the Kindle unique compared to a computer is the technology behind displaying the text. The text is crisp and clear and comparable to reading text in a book. Also, as it's not constantly refreshed, the battery life is longer than a laptop. Finally, the Kindle is extremely light and easy to hold, and can connect to Amazon's Whispernet to buy books without needing a computer or Internet access. The Kindle is a great tool for anyone who enjoys reading.

Amazon.com released a more robust version of the regular Kindle eBook reader, called the Kindle Fire, on November 15, 2011. The Kindle Fire is a tablet, whereas the regular Kindle is only an e-reader. As a tablet, it is more powerful, featuring a dual-core or quad-core ARM processor, and is capable of playing music, movies, games, surfing the web, and running other applications. For web surfing, the device uses a browser named Amazon Silk.

The Kindle Fire lets you store Amazon content for the device on their cloud servers. It runs on a version of the Android operating system from Google.