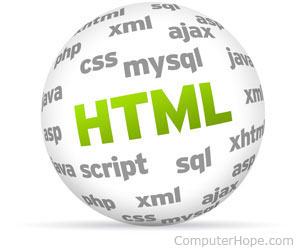 A computer language that consists of easily understood keywords, names, or tags that help format the overall view of a page and the data it contains. Some examples of a markup language are BBC, HTML, SGML, and XML.

Below is an example segment of HTML (Hypertext Markup Language) code that creates bold text on a web page.

The <b> tag in this code snippet is one of many HTML tags. These tags change the way elements, such as text, appear in a web browser. Below is an example of the output.

Example of bold in HTML.

A markup language is not a programming language. It is special markings, interspersed with plain text, which, if removed or ignored, leave the plain text as a complete whole. Or, those markings can be interpreted in a predefined manner (make this text bold, make this text an ordered list) that enhances its presentation to the reader. In contrast, plain text may be (and often is) part of a computer program; however, its representation varies according to the programming language and the programmer's writing style. Importantly, if all non-plain-text components of a computer program are removed, the remaining plain text is not guaranteed to be complete or correctly ordered.

For example, the HTML that makes up this web page is a good example of markup. The HTML tags indicate how the textual components of the content are displayed in your web browser. But, if the HTML, CSS, and JavaScript were removed, most of the text would remain and be legible by a human.

However, like all markup languages, HTML is limited in creating interactive, dynamic, or computational behaviors. To create a web page that performs more sophisticated functions (e.g., search), a programming language, such as JavaScript, Perl, or PHP, is necessary.

What program do I need to write markup language?

To create any markup language file, any text editor can be used. For people who need syntax highlighting, you'll need a more advanced text editor like Notepad++ or an IDE (integrated development environment).

For people who're writing HTML, it's easier to use an HTML editor such as Dreamweaver.