A 5.25-inch diskette is an older diskette that first development in 1976 and later became a standard in 1978. The diskettes were popular throughout the 1970s and early 1980s, and are similar to the 3.5-inch floppy diskette with a lesser capacity and larger dimension. Unlike their rigid, 3.5" counterparts, the 5.25-inch diskettes are flimsy. 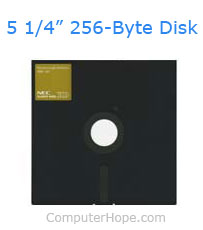 The 5 1/4" floppy diskette was really floppy (flimsy), hence the name. As you can see in the above illustration, the 5 1/4" floppy does not have many involved components. First, notice the write protection tab found on diskettes that allowed information to be written to them. To write-protect the diskette, a piece of tape is placed over the hole, or if there is no hole, the diskette is already write-protected.

Second, notice the large hole in the center of the floppy diskette. This hole facilitated the rotation of the disk platter.

Third, notice the index hole. It tells the computer where the starting point of the sector is by having a hole punched in the film disc and plastic casing.

Finally, the write access hole is where the computer floppy drive would write the information to the diskette.