Root may refer to any of the following: 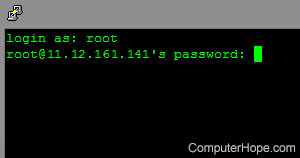 1. Alternatively referred to as an admin, administrator, and gatekeeper, root is a superuser account on a computer or network and has complete control. See our Administrator definition for a full explanation.

How to get back to the root directory

To return to the root directory, use either of the commands below, depending on what command line you are using.

In the Microsoft Recovery Console, you can set the current directory to the system root with the systemroot command.

3. With Android devices, root refers to unlocking the Android device to allow more access to the core software that was blocked by the manufacturer of the device.

5. With linguistics, root is a word without a prefix or suffix. For example, with the words " portal, portable, and transport" the word "port" is the root word. The roots of a word help you determine the meaning of new word you may have never encountered.

Use our word and letter search to find words containing any root.

6. Root is an ability, effect, or spell in computer games that locks a target in place. For example, in the game World of Warcraft, the Mage class has a spell called frost nova that freezes an enemy in place for a few seconds. (It's super OP.)