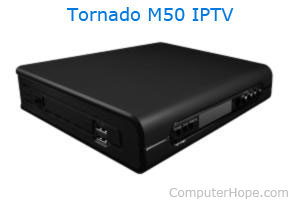 A set-top box, also known as a set-top unit, is an information appliance that connects to a television set. Set-top boxes have a variety of uses. They might receive a cable or satellite television signal and present the content to the viewer, or connect to the Internet and deliver streaming video content. The Tornado M50 is an IPTV; an example of a set-top box.

Set-top boxes generally feature an electronic program guide, functionality for saving a list of your favorite programs, and a timer for changing channels. These devices often include DVR functionality which allows the user to record television shows and movies in a digital format on the device, and view them later.