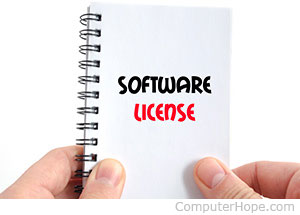 A software license is a license agreement that gives an individual, company, or organization permission to use a software program. For example, in most situations, it is illegal to purchase one copy of a program and copy it onto multiple computers. Instead of requiring tens, hundreds, or thousands of individually licensed copies of a program, companies often purchase site licenses which scale according to the number of installed users.

If you have an OEM computer that came with Microsoft Windows or another software program, its software is not transferrable. For example, you could not use the software license from an HP or Dell computer on any other computer.