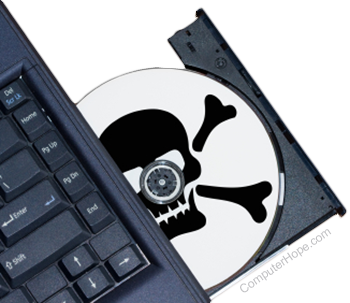 Software piracy describes the act of illegally using, copying, or distributing software without ownership or legal rights. The majority of software today is purchased as a single-user license, meaning that only one computer may have that software installed on it at one time. Copying that software to multiple computers or sharing it with your friend without multiple licenses is considered software piracy, which is illegal. Additionally, downloading pirated software from the Internet could be a security risk to your computer; it can be difficult to know what else may be getting installed.

A user who participates in software piracy (cyber piracy or online piracy) is called a pirate or software pirate.

What is pirated software?

Any software you did not pay for or see online for free that's normally not free is considered pirated software. For example, Adobe Photoshop is a popular commercial image editor that must be paid for to use. If you found a way to install that software for free on your computer, you're committing software piracy.

Freeware and open source software is free software that can be installed and used for free on your computer. Using this software for free does not make you a pirate.

How is someone affected by software piracy?

What is a pirate?

The term pirate originally came from a person who attacks, robs, or plunders other ships at sea. The words pirate and piracy are used with software because a person (pirate) is robbing a software company by not paying to use their product.