Short for Atanasoff-Berry Computer, the ABC is considered the first electronic digital computer and was the first machine to use vacuum tubes (over 300 vacuum tubes). Professor John Vincent Atanasoff and graduate student Cliff Berry developed the ABC in 1937 and continued development until 1942 at the Iowa State College (now Iowa State University). On October 19, 1973, Judge Earl R. Larson concluded that the ENIAC, patent by Eckert and Mauchly was invalid and named Atanasoff the inventor of the first electronic digital computer. 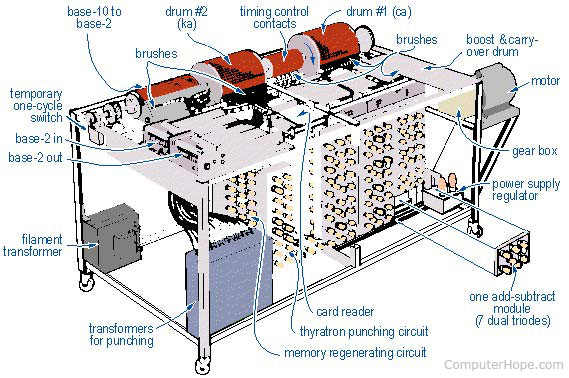 Above is a public domain picture from the United States Department of Energy illustrating the major components of the Atanasoff-Berry Computer.