App may refer to any of the following: 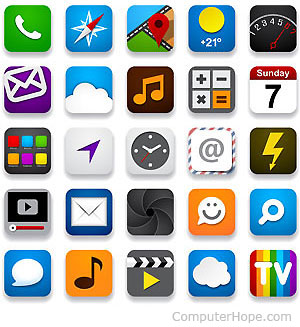 1. Alternatively referred to as a mobile app, an app is a program developed for smartphones or tablets running a mobile operating system, such as iOS or Android. Mobile apps can be installed from the App Store, Google Play, or the default application store installed on a mobile device.

When Apple introduced the iPhone, they popularized the term "app" in conjunction with the launch of the App Store. However, there is no technical distinction between an app (application) and a program. Generally speaking, the term "app" is an application on a smartphone or tablet, and a "program" refers to software that runs on a desktop computer.

With all the different ways companies and people use these terms, it's best to think of an application, app, and program as the same things. See our program page for further information on computer programs.

There are thousands upon thousands of mobile applications available today. You can find one to meet almost any need and use case, including the following:

Can I run smartphone apps on my computer?

Many apps are specifically designed for the smartphone and require a smartphone to operate. For example, Google Maps requires GPS that is not something a typical computer has. However, other more basic apps and games can run on a computer using a program like BlueStacks.

2. When Microsoft introduced Windows 8, they introduced "Apps" into Microsoft Windows. Although we described an app as being short for application earlier, a Windows 8 App or Windows 10 App is not the same as a Windows application or Windows program. To find and install a Windows 8 App, visit the Store from the Windows Start screen, click the App, and choose the option to Install the App. Once an App is installed, you can run that App from the Start Screen or Start menu in Windows 10. Other programs can still be installed and run anywhere on the computer.