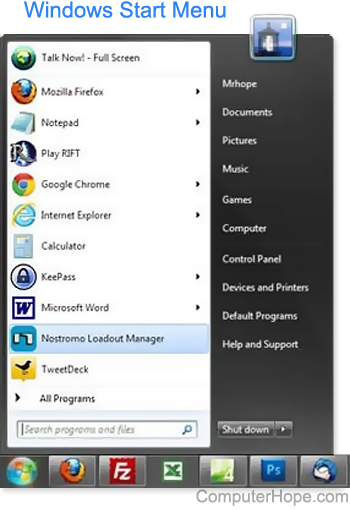 The Microsoft Windows Start menu is the primary location in Windows to locate your installed programs and find any files or folders. By default, the Start menu is accessed by clicking Start in the bottom-left corner of the Windows desktop screen. The picture shows an example of the Windows 7 Start menu.

You can press the Windows key on the keyboard or Ctrl+Esc keyboard shortcut to open the Start menu.

If you're more familiar with Apple computers, you can think of the Start menu as the Apple menu.

Where is the Start menu?

For versions of Microsoft Windows supporting the Start menu, it's found by click Start and is shown in the bottom left portion of the screen by default. Its position can change if the Taskbar position is changed from the bottom of the screen.

Computer's that are not running Microsoft Windows (e.g., Linux computers and Apple computers) do not have a Start menu. Also, there are no smartphones or tablets with a Windows Start menu.

What versions of Windows have the Start menu?

What is accessible in the Start menu?

At the bottom of the left pane is the All Programs option that displays all programs installed on the computer.

Directly below the All Programs option is the "Search" bar. This useful feature allows you to type in the name of the program or file you're looking for and have the results displayed above.

The right pane shows each of the more commonly accessed sections of the computer, such as your Computer, Control Panel, Documents, Music, and Pictures.

You can find the version of Windows on your computer if you right-click Computer and select Properties. In the System window, you can view basic system properties, including the Windows version and access the Device Manager.

The Windows 10 Start menu made some drastic changes to the Start menu available in previous versions of Windows, as is immediately apparent in the picture below. One of the most noticeable changes is the integration of tiles (from the Windows 8 start screen) into the Start menu. From this Start menu, you can access all your programs through the "All apps" option and in the left pane.

Should I capitalize "menu" in Windows Start menu? 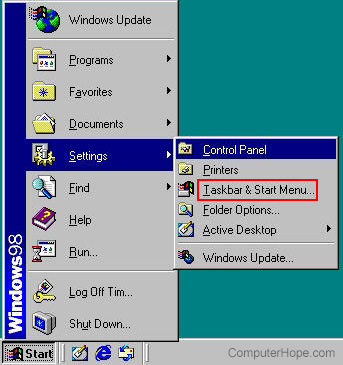