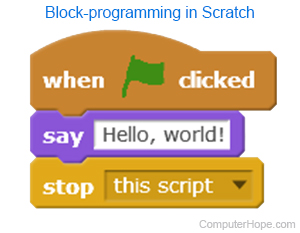 As opposed to text-based programming, block-based programming refers to programming language and IDE that separates executable actions into modular portions called blocks. These blocks are generally represented with icons that can be clicked and dragged to reorder them. Editable fields, like drop-down menus, allow users to provide further input. This graphical representation of the code can demonstrate the process to new users who may be unfamiliar with programming.

Block-based programming is often used to help children learn how to create basic programs and begin to understand programming.