Bots may refer to any of the following: 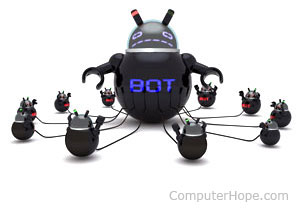 1. Short for robots, bots are fictitious characters, programmed characters, or pieces of software designed to mimic characters or real players in a video game. These types of bots are more often called an NPC (non-player character).

2. A bot may be programmed to perform tasks like scraping/aggregating metadata from websites, automatically updating a web page, or interacting with a chat room. Hopebot is an example of a bot used by Computer Hope.

3. In a MMORPG, a bot generally refers to a third-party application that controls a player's in-game character while they're not at their keyboard, or AFK. Their purpose is to gain experience or valuables through repetitive actions that are sometimes considered monotonous to a player.

How do you bot in a game?

Computer Hope does not help players bot or otherwise cheat in games.

4. A bot is another name to describe a spider that crawls Internet web pages and grabs the content or keywords on the page.

5. Shorthand for back on topic, BOT is commonly used in chat rooms and other text message communications. Below is an example of how this could be used.