A robot may refer to any of the following:

1. A robot is a term coined by Karel Capek in the 1921 play RUR (Rossum's Universal Robots). A robot describes a computerized machine designed to respond to input received manually or from its surroundings. Today, robots perform repetitive and often difficult tasks, such as building cars or computer equipment.

AI (artificial intelligence) is a growing industry, and the technology is being incorporated into many areas of other technology, including computers and robots. Some day, robots may think for themselves and be able to act like a human, due to AI.

What are the laws of robotics?

Those interested in robots often enter the field of robotics that deals with everything that goes into making a robot. Those interested in the field of robotics should be familiar with Asimov's Laws, created by Isaac Asimov. More formally known as The Three Laws of Robotics, Asimov incorporates the laws into all his fictional books, governing how robots are developed and programmed to operate. Many people today consider these laws to be applicable in the real world as well, not only in the fictional world. The Three Laws of Robotics, as quoted from Asimov's writings, are as follows:

Is a robot a computer?

No. A robot is considered a machine and not a computer. The computer gives the machine its intelligence and its ability to perform tasks. 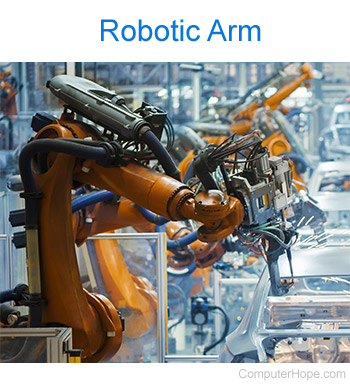 How is a robot different from a computer?

A robot is a machine capable of manipulating or navigating its environment, and a computer is not. For example, a robot at a car assembly plant assists in building a car by grabbing parts and welding them onto a car frame. A computer helps track and control the assembly, but cannot make any physical changes to a car.

Another example would be to think of your human body as a robot and your brain as a computer. Your brain helps control your arms and legs to manipulate physical objects and move around. If you wanted to throw a ball, your brain visualizes and plans the actions required. When it is ready, your arm performs those tasks. Your arm throwing a ball is similar to a robotic arm at an assembly plant putting a car together.

Can a robot be afraid?

No. A robot does not experience emotions like a human. However, a programmer could program a robot to exhibit human-like emotions that are pre-programmed conditions. For example, a robot with heat sensors could exhibit fear if its temperature sensor exceeded 100-degrees.

Software bots are written to perform common tasks such as a form submission to advertise on a website automatically. To protect against these bots, a website asks if you're a robot as a CAPTCHA to determine if you're a human or a robot. This protection is done by analyzing the mouse movements and looking for any other irregularities as the user checks the I'm not a robot check box.

2. The term robot describes software or a program designed to perform tasks automatically.

3. On the Internet, a web robot or robot describes a spider.

4. A robot is another way of describing bots.