A character may refer to any of the following:

1. Sometimes abbreviated as char, a character is a single visual object used to represent text, numbers, or symbols.

An invalid character error may be encountered when a character is used that is not supported by the program or operating system. For example, you may get this error when trying to use a non-alphanumeric character or a character with an accent.

How to write a character on a computer

The most common method for a user to write a character on a computer is with the keyboard. Smaller devices like a smartphone that don't use a physical keyboard may use a virtual keyboard. It's also possible to input a character using voice recognition. 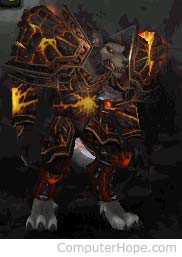 2. A character is a term used to describe a sprite or 3-D model that takes on the role of a fictitious player in a computer game.

For example, while playing a game, you are considered a PC (player character) in that game. If you encounter a character that is not controlled by another human, it is referred to as an NPC (non-player character). The picture is an example of a character in the World of Warcraft game.