Alternatively known as a display adapter, graphics card, video adapter, video board, or video controller, a video card is an expansion card that connects to a computer motherboard. It is used to create a picture on a display; without a video card, you would not be able to see this page. More plainly, it's a piece of hardware inside your computer that processes images and video, some of the tasks normally handled by the CPU. Video cards are used by gamers in place of integrated graphics due to their extra processing power and video ram.

A visual overview of a computer video card

Below are two visual examples of what a video card may look like inside of a computer. First is a picture of an older model AGP video card with multiple types of connections and components on it. Second is an example of a more modern PCI Express video card used with today's gaming computers.

Some motherboards may also use an onboard video card, which means the video card is not a separate expansion card like those shown below. 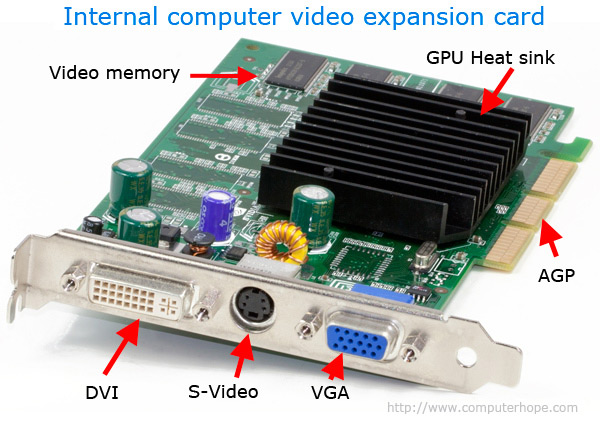 The pictures above also help illustrate the types of video ports used with video cards. For more information about any of these ports, click the links below.

In the past, VGA or SVGA was the most popular connection used with computer monitors. Today, most flat-panel displays utilize DVI or HDMI connectors.

Some OEM computers and motherboards may have a video card onboard or integrated into the motherboard.

Can I install more than one video card?