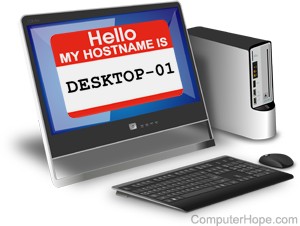 Also called a computer name, nodename, or sitename, a hostname is the name of a computer or device (host) on a network.

Below is an example of a hostname that is assigned to a computer connecting to the Internet using Comcast.

In this example, the hostname has the IP address (61.123.45.67), "CO" for Colorado, and comcast.net, which is the ISP hosting the customer. This type of hostname would be stored in a Domain Name System to help with mapping the hostname to an address.

On the Internet, a hostname is a domain name assigned to a host computer. For example, if Computer Hope had two computers on its network named "bart" and "homer," the domain name "bart.computerhope.com" is connecting to the "bart" computer. The IP address of the "bart" computer is obtained by looking up the hostname "bart.computerhope.com" in the host's file or DNS resolver.

When referring to an Internet web page (e.g., computerhope.com) or Internet location, a hostname is more often referred to as a domain name. If the domain name includes a TLD (top-level domain), then the hostname is an FQDN (fully qualified domain name).

How to see a computer's hostname

There are many different ways to determine a computer's hostname. On a Microsoft Windows computer, you can open the command line and run the hostname, ipconfig /all, or net view commands.

Below are a few rules and restrictions that must be followed for a hostname to be valid.

Should I use "host name" or "hostname" in my writing?

When referring to a computer on a network, "hostname" should be written as one word with no space unless referencing a product that uses the two-word form.

The Microsoft ipconfig, systeminfo, and other command line commands use "Host name" in the output.