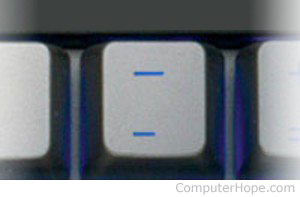 Alternatively known as a dash, subtract, negative, or minus sign, the hyphen ( - ) is a punctuation mark on the underscore key next to the "0" key on US keyboards. Pictured is an example of the hyphen and underscore key on top of the keyboard.

Where is the hyphen key on the keyboard?

Below is a computer keyboard with the hyphen keys highlighted in blue. One is on the main keyboard, and the other is on the numeric keypad.

How to create the hyphen symbol

Creating the "-" symbol on a U.S. keyboard

To create a hyphen using a U.S. keyboard, press the hyphen key. It's on the same key as the underscore ( _ ), to the right of the zero key.

The hyphen is easier to use on the numeric keypad with math formulas.

Doing the Alt code Alt+45 can also create a hyphen.

Creating the "-" symbol on a smartphone or tablet

To create a hyphen on a smartphone or tablet open the keyboard and go into the numbers (123) or symbols (sym) section and tap the "-" symbol.

What is a hyphen used for on a computer?

With computers, the hyphen is commonly used in programming and mathematics to subtract one number from another. The following sections contain examples of how a hyphen is used.

Hyphen in a math formula

In a math formula, a hyphen is used to represent a subtraction (minus). For example, in the below formula you can see that 2 <minus> 1 is equal to 1.

To subtract numbers on a computer or smartphone a calculator or spreadsheet could be used.

Hyphen in a search

A hyphen in English

Hyphens are used in some compound words to make the word easier to read and help clarify words used together. For examples "to-do," "merry-go-round," "high-risk," "T-shirt," and "sixty-six" are all words with hyphens. See the when should I hyphenate words section for further information.

Other places with the minus symbol

A minus symbol or a horizontal line is a symbol used as an indication for a decrease, remove, move up, or zoom out on software programs and hardware devices. In Microsoft Windows, the minus or underscore is also shown in the top-right side of a window to represent the minimize feature.

How to create a longer hyphen

A dash that is longer than a hyphen is called an en dash or em dash. See our en dash and em dash pages for further information on creating these longer hyphens.

When should I hyphenate words?

Hyphens are used in some compound words (connected words) to make the word easier to read and help clarify words used together. For examples "to-do," "merry-go-round," "high-risk," "T-shirt," and "sixty-six" are all words with hyphens. Below are some of the most common rules of hyphenation. Keep in mind many rules only apply in certain circumstances and that this list of rules is far from complete.

What is the other symbol on the hyphen key?

On U.S. keyboards, the hyphen key is shared with the underscore key, which may be shown next to or above the hyphen symbol.