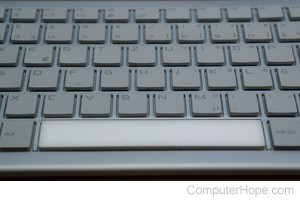 Alternatively known as space and the space key, the spacebar or space bar is a long horizontal key on the lower edge of a keyboard. It's always the largest and longest key on the keyboard. When the spacebar key is pressed, it creates an empty space known as a space character or whitespace that helps separate words and other characters in a sentence. For example, if there were no spaces in this paragraph, all of the text would be together and very difficult to read.

When the keyboard is positioned in front of you, the spacebar should be in the center of your body.

Where is the spacebar on the keyboard?

Below is an overview of a computer keyboard with the spacebar highlighted in blue.

What is the function of the spacebar?

Pressing Spacebar once creates a single space where the text cursor is currently positioned.

In Adobe Photoshop, hold down Spacebar to change the mouse cursor to a hand and move around the picture.

In the practice below, add spaces to the text by clicking the mouse pointer where you want space added and once positioned, press Spacebar. Once the text cursor is in the box below, you can also use the arrow keys to move the cursor.

Why is the spacebar the biggest key on the keyboard?

The spacebar is the biggest key on the keyboard because both thumbs should be resting on the spacebar.

Do both thumbs press the spacebar?

Although both thumbs should be resting on the spacebar, only one thumb should be pressing the spacebar. Usually, a right-handed person would press the spacebar with their right thumb. However, it's up to the user to decide which thumb works best for them.

How many spacebar keys are on a keyboard?

What keys are on the same row as the spacebar?

Apple computers and keyboards have the following keys on the spacebar row.

Compact and laptop keyboards may also have the following keys on the spacebar row.

What are the rows above and below the spacebar row?

The spacebar row is the last row of keys on the keyboard, with the bottom row keys being above and no rows below.

Some may refer to the spacebar row as the bottom row because it's the row closest to the bottom of the keyboard.

How many spaces are in a tab?

In most cases, a tab consists of five spaces.

Although all operating systems today support spaces in file names, in a command line, you may encounter errors because the command line doesn't know where the file name starts and ends. To prevent errors with file names with spaces, surround the file name with quotes.

Should I use "space bar" or "spacebar" in my writing?

When referring to a key on a keyboard, both "space bar" and "spacebar" are correct. At Computer Hope, we use the single word version "spacebar" or "spacebar key" in all of our writing.