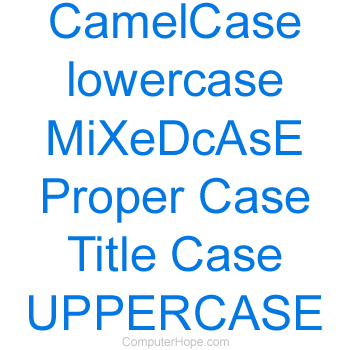 Alternatively known as caps and capital, and sometimes abbreviated as UC, uppercase is a typeface of larger characters. For example, typing a, b, and c shows lowercase, and typing A, B, and C shows uppercase. To type in uppercase, you can use either the Caps Lock key or the Shift key on the keyboard.

It's bad etiquette to have everything you type in ALL UPPERCASE CHARACTERS. When reading anything typed in all caps, most readers assume you are YELLING or find the text hard to read.

When talking about a computer keyboard key, CAPS may be used to label the CapsLock key.

Why is capitalization important?

Passwords are case-sensitive to add an extra level of security. If your caps lock key is enabled while creating your password, but not when you log in the next day, you won't be able to access your account.

Command line commands in operating systems like Linux are case-sensitive, which means if you typed "Ls" to list file you would get an error since the ls command is all lowercase.

In earlier programming languages like FORTRAN, the keywords and the names of data objects needed to be uppercase because punch card machines did not have a Shift key.

To help differentiate an acronym from other words in a sentence, they are typed in uppercase. For example, the acronym RAM is typed in all uppercase to help identify the word as an acronym.

Many programming and scripting languages use the uc function to convert a variable into uppercase. For example, in the example below is how the uc and ucfirst functions can be used in Perl.

What is the difference between capitalize and uppercase?

When should I capitalize text?

Below is a list of some of the general rules that should be followed when capitalizing words.

Below is a list of times capitalization should not be used.

Should titles and headings be capitalized?

With formal writing, the titles and headings should use title case. All other forms of writing should follow the rules set by the used style guide. For example, Computer Hope follows the Microsoft Manual of Style and uses sentence case for its headings.

Should I use "uppercase" or "upper case" in my writing?

Both "uppercase" and "upper case" are correct. However, only use one form in your writing. According to The Associated Press Stylebook and the Microsoft Manual of Style, write "uppercase" as one word when used as an adjective and as a noun.