A job may refer to any of the following: 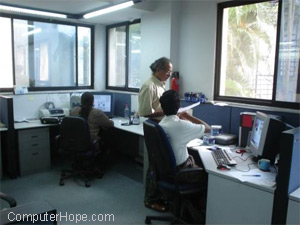 1. In general, a job is work or a task that's been assigned, currently being worked on, or was completed. Today, a job is a paid position most often completed by a human. However, as computers and robots become more sophisticated, more jobs are being done by a computer.

Examples of human computer-related jobs can include an administrator, engineer, programmer, and technical support.

2. With Linux, jobs is a command that allows you to show running jobs. See our jobs command page for further information and examples on this command.

3. When referring to JCL or an IBM mainframe operating system, a job refers to a multitude of tasks, such as executing a program, copying data, etc.

4. When referring to a person, Jobs is often used to describe Steve Jobs.