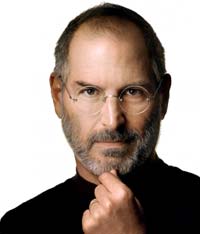 "Remembering that you are going to die is the best way I know to avoid the trap of thinking you have something to lose. You are already naked. There is no reason not to follow your heart."

"That's been one of my mantras - focus and simplicity. Simple can be harder than complex; you have to work hard to get your thinking clean to make it simple."

"Your time is limited, so don't waste it living someone else's life. Don't be trapped by dogma — which is living with the results of other people's thinking. Don't let the noise of others' opinions drown out your own inner voice. And most important, have the courage to follow your heart and intuition. They somehow already know what you truly want to become. Everything else is secondary."

"We have always been shameless about stealing great ideas."

"Being the richest man in the cemetery doesn't matter to me ... Going to bed at night saying we've done something wonderful ... that's what matters to me."

"It's really hard to design products by focus groups. A lot of times, people don't know what they want until you show it to them."

"You can't connect the dots looking forward; you can only connect them looking backwards. So you have to trust that the dots will somehow connect in your future. You have to trust in something — your gut, destiny, life, karma, whatever. This approach has never let me down, and it has made all the difference in my life."

"It's better to be a pirate than join the Navy."

"When I was 17, I read a quote that went something like: 'If you live each day as if it was your last, someday you'll most certainly be right.' It made an impression on me, and since then, for the past 33 years, I have looked in the mirror every morning and asked myself: 'If today were the last day of my life, would I want to do what I am about to do today?' And whenever the answer has been 'no' for too many days in a row, I know I need to change something."

"I don't think there would have ever been an Apple computer had there not been a blue box."