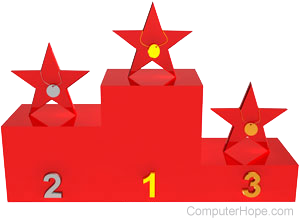 The term leaderboard is often used in the video gaming industry to signify rank among people who play various titles. Players can be ranked against other players based on their number of kills (most common), collected items, or some other metrics. Overall, leaderboards can incentivize players to improve as they give many a sense of superiority or accomplishment.