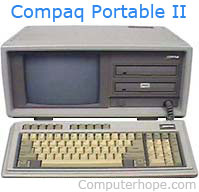 First released in 1982, the luggable computer is an early computer that was easier to move than other computers, weighing around 15 to 30 pounds. These computers had a small CRT display and keyboard as one unit. In some cases, the keyboard was separate. While not anything like laptops, these computers offered several benefits for mobility compared to the standard computer at the time. The picture shows a Compaq Portable II computer and an example of a luggable computer.