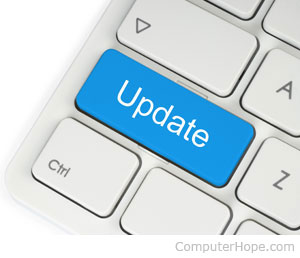 A patch is a piece of software code that can be applied after the software program is installed to correct an issue with that program. Most software programs may have several patches after their initial release and usually update the version of the program when installed.

Software patches, when available, are generally found at the software developer's website.

The term patch is derived from the physical patches programmers used place over holes on punch tape to fix problems.

What are unofficial patches?

When a product reaches EOL (end-of-life) and is no longer supported or the company goes out of business it will no longer release patches. Some enthusiasts may spend the time to release their patches to fix these problems. Because these patches were not made by the original developer they're considered "unofficial patches."