A bug is a general term describing any unexpected hardware or software problem. For example, Grace Hopper logged and taped a moth bug in a log book that caused issues with the Mark II. The bug, which is shown below, was discovered in one of its components. Grace Hopper's moth is often considered the first use of the term bug. However, there are other earlier accounts of the term bug describing a problem with electrical circuits and hardware. 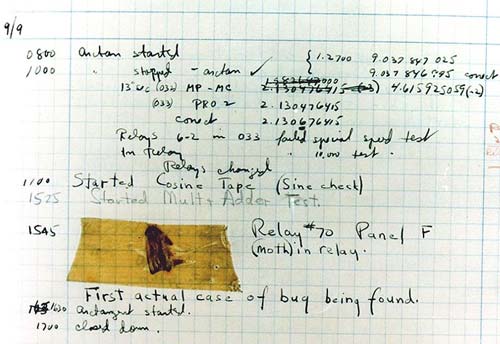 How is a bug fixed?

The time it takes to resolve a bug depends on its complexity, the number of developers, and how much time they have. If you believe you've found a bug in a program or device, reporting the bug to the manufacturer is the best way to resolve the bug.

What is the difference between an error and a bug?

An error is a message shown to the user of a program to let them know something went wrong. A bug is a problem in the code that caused the error. See our error page for a full explanation and examples of computer errors.

Why doesn't a company fix the bug I'm encountering

To fix any software or hardware bug requires the company to hire a programmer capable of locating and correcting the code causing the bug. The following list is why a company may not fix a bug or delay its fix.

The term "buggy" describes any software or service with several bugs.

Is a bug a virus?

No. A computer virus is software designed to be annoying or destructive. However, a bug is only a mistake in the code. For further information about viruses, see our virus term page.