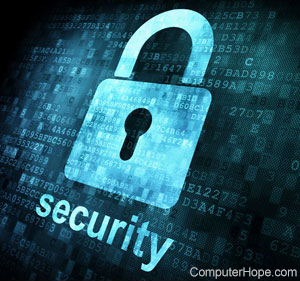 A secure network is any home, business, school, or another network with security measures in place that help protect it from outside attackers. Of course, there is no such thing as an entirely secure network. Once a computer or other device on the same network connects to the Internet, it immediately becomes vulnerable to attacks. However, taking the proper steps helps keep a network secure.

What helps make a network secure

After a security vulnerability is discovered for any device, updates are released to fix those vulnerabilities. Consequently, if your computer or device is not updated, it may be susceptible to said vulnerabilities, especially if they are released to the public. Thankfully, most computers and network connected devices update automatically. However, it's best practice to manually check all devices periodically. Ensure that automatic updates are enabled, and your device is running the latest version of the operating system, with all available security patches.

You can have the most secure network that ever existed, but if people who use that network are not familiar with security threats, its safeguards are ineffective. In fact, most hackers who gain access to a network can because of social engineering, phishing, or a user unknowingly or knowingly granted them access.

A network is usually breached from a user's computer, after infection by malware or a virus that facilitates malicious third-party access to the network. Keeping each of the computers guarded with an antivirus and malware protection helps prevent these types of attacks.

In an enterprise, school, and government environment, adding additional security to a network becomes even more important due to the increased likelihood of attack. Good examples of network devices and services that can be employed to help improve security include a firewall, IDS, UTM, and a VPN.