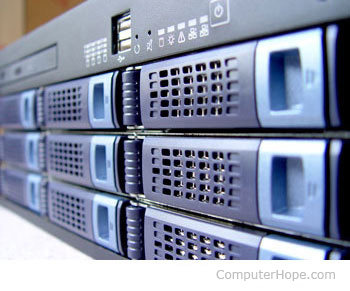 A server is a software or hardware device that accepts and responds to requests made over a network. The device that makes the request, and receives a response from the server, is called a client. On the Internet, the term "server" commonly refers to the computer system that receives requests for a web files and sends those files to the client.

What are they used for?

Servers manage network resources. For example, a user may set up a server to control access to a network, send/receive e-mail, manage print jobs, or host a website. They are also proficient at performing intense calculations. Some servers are committed to a specific task, often referred to as dedicated. However, many servers today are shared servers that take on the responsibility of e-mail, DNS, FTP, and even multiple websites in the case of a web server.

Why are servers always on?

Because they are commonly used to deliver services that are constantly required, most servers are never turned off. Consequently, when servers fail, they can cause the network users and company many problems. To alleviate these issues, servers are commonly set up to be fault tolerant.

How do other computers connect to a server?

An Internet server works the same way as a local network server, but on a much larger scale. The server is assigned an IP address by InterNIC, or by web host.

Where are servers stored?

In a business or corporate environment, a server and other network equipment are often stored in a closet or glass house. These areas help isolate sensitive computers and equipment from people who should not have access to them.

Servers that are remote or not hosted on-site are located in a data center. With these types of servers, the hardware is managed by another company and configured remotely by you or your company.

Can my computer be a server?

Yes. Any computer, even a home desktop or laptop computer, can act as a server with the right software. For example, you could install an FTP server program on your computer to share files between other users on your network.

Although it is possible to have your home computer act as a server, keep the following ideas in mind.