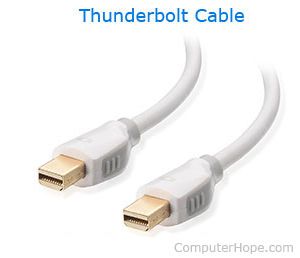 Originally marketed under the name Light Peak, Thunderbolt is an interface that is used to connect peripheral devices to a computer. It is a serial interface that combines existing PCI Express and DisplayPort technologies. It allows for long distance data transfer over cheaper cables capable of carrying DC power.

The technology was developed by Apple and Intel, but Intel owns the rights to it. Apple helped bring the technology to market by including it in the updated MacBook Pro models on February 24, 2011.

What materials make up a Thunderbolt cable?

There are two types of Thunderbolt cables, one which utilizes copper wiring and the other utilizing optical wiring. Although Thunderbolt cables were originally intended to use fiber optic cables, those versions have had limited releases. Copper wiring is much cheaper and allows the cables to supply power, which is why it was used almost exclusively. Eventually, Intel intends to combine both copper and optical wiring for the faster bandwidth speeds of optical, while utilizing the power of copper wiring.