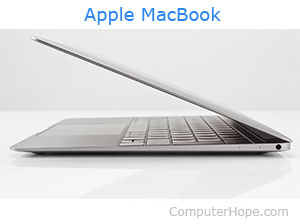 The original MacBook's production was ceased from late 2011 up through 2014, but was relaunched at the beginning of 2015. Going by names like "New MacBook" and "MacBook Retina," the 2015 version included many significant changes. Two innovations included the Force Touch trackpad and a butterfly mechanism for the keyboard's switches.

Alternatively referred to as the MBP, the MacBook Pro is a slightly thicker and optionally larger laptop than the MacBook. With more robust internals, it is geared toward users who need their laptop to perform more intensive tasks like video editing. In 2011, the MacBook Pro was the first of Apple's computers to utilize their proprietary Thunderbolt port.