DisplayPort may refer to any of the following: 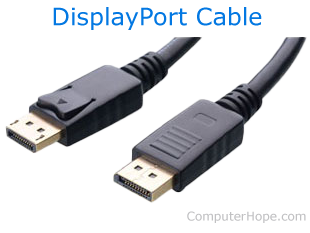 1. DisplayPort, abbreviated as DP, is a digital audio and video interface created by VESA. Its connections come in two varieties: standard, (shown in the picture) and the smaller Mini DisplayPort. Despite the difference in size, both connection types transmit identical signals. These cables are used to a display device like a computer monitor or projector to a computer.

The DisplayPort cable connects to a computer video card. However, not all video cards have this port. If it's not available, you'll need to use a different cable supported by your video card.

DisplayPort cables are very similar to high-speed HDMI in terms of bandwidth, but can have a much higher refresh rate at peak resolution (60 Hz vs. HDMI's 24 Hz). A DisplayPort-to-HDMI converter cable is available, to connect a DisplayPort to an HDMI port.

2. In general, when referring to hardware connectivity, a display port is an opening in the computer that connects to a monitor, projector, or TV cable. Today, the most common types of display ports include DVI, HDMI, and VGA.