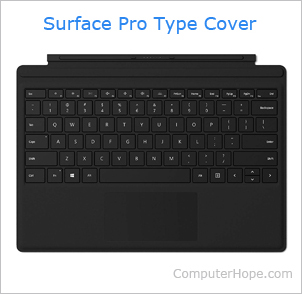 The Type Cover is a computer peripheral created by Microsoft that is used with their portable Surface line of products, including the Surface Pro and Surface Go. As the name would suggest, the Type Cover acts as a foldable screen cover and a keyboard. It connects to Surface devices using magnets, allowing it to "snap" into place and be detached easily.

Type Cover - The original version was released on October 26, 2012, alongside the original Surface. It featured 80 touch sensors and a felt keypad.

Type Cover 2 - This version was released at the same time as the first Surface Pro. It featured a plastic keypad (instead of felt), backlit keys, and 1,092 sensors.

Surface Pro Type Cover - This iteration came out with the Surface Pro 3. It's larger, has better key spacing, and a glass trackpad. Over the years, different colors were added.