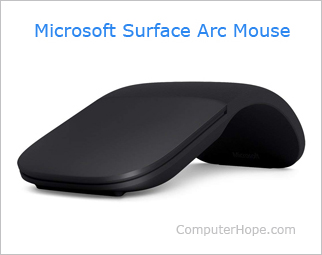 The Arc Mouse is a computer peripheral created by Microsoft and used with many of their products. It has all the functions of a traditional computer mouse, but also a sleek and unique design. In addition to its aesthetics, the Arc Mouse is foldable, facilitating increased portability, and ergonomics.

Arc Mouse - The original Arc Mouse was released in 2008. Similar to a standard mouse, it had left and right click buttons, and a scroll wheel.

Arc Touch Mouse - This iteration eliminated the traditional click buttons and scroll wheel, and replaced them capacitive touch buttons. Furthermore, the mouse was no longer foldable, but would "flatten out" instead.

Arc Touch Bluetooth Mouse - As the name implies, this version is the same as the Arc Touch Mouse, with the addition of Bluetooth connectivity.

Surface Arc Mouse - This mouse was released with the 5th generation Surface Pro. It replaces all buttons with a flat, touch-sensitive surface (shown above).