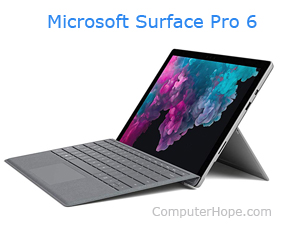 The Surface Pro is a line of 2-in-1 computers that are part of the Surface family of products by Microsoft. It was the first tablet to run a full Windows operating system. It features an adjustable kickstand for customizing the viewing angle. The Surface Pro has several accessories that are sold separately, including the following.

Below is a list of each version of the Surface Pro and their release dates.

The Surface Pro 6 is 0.3-inches thick and weighs only 1.7 pounds (without the optional magnetic folio cover). It features an Intel Core i5 or i7 processor, an Intel UHD Graphics 620 integrated GPU (graphics processing unit), up to 16 GB of RAM, and up to 1 TB of SSD storage. It offers connections for USB 3.0 and Mini DisplayPort, and has a 3.5 mm headphone jack.