Advantages of SSD over HDD 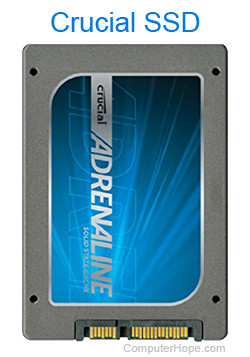 The standard HDD (hard disk drive) has been the predominant storage device for computers (both desktops and laptops) for a long time. The main draw is the high storage capacity and low cost.

The SSD (solid-state drive) is another storage solution replacing the hard disk drives. As you'll learn by reading the following comparisons, the SSD technology is superior. However, due to its price per unit of memory, it may not make sense to use SSDs in all instances. For most computer users, we recommend using an SSD as the primary drive for your operating system and the programs you access most frequently. Then, we suggest purchasing a large HDD (either internal or external) for storing documents, pictures, and music.

SSD - An SSD has access speeds of 35 to 100 microseconds, which is nearly 100 times faster. This faster access speed means programs can run quickly, which is very significant, especially for programs that access large amounts of data often, like your operating system.

Bottom line: SSD wins in this category. An SSD is much faster than an HDD.

SSD - The price of a solid-state drive is higher per MB (megabyte) than an HDD. Desktop computers with an SSD may also have one or more HDDs for cheaper, secondary storage.

HDD - HDD is considerably cheaper than SSD, especially for drives over 1 TB (terabyte).

Bottom line: HDD wins in this category. Although SSDs have come down in price, an HDD is always going to be cheaper.

SSD - The SSD has no moving parts. The SSD uses flash memory to store data, which provides better performance and reliability over an HDD.

HDD - The HDD has moving parts and magnetic platters, meaning the more use they get, the faster they wear down and fail.

Bottom line: SSD wins this category. With the lack of moving parts, an SSD is more reliable than an HDD.

SSD - Although there are large SSDs, anything over 3 TB is usually outside of most people's price range.

Bottom line: HDD wins this category. Although there are large SSD solutions, it's easier to find bigger and more affordable HDD.

SSD - The SSD uses less power than a standard HDD, which means a lower energy bill over time, and for laptops, an increase in battery life.

HDD - With all of the parts required to spin the platters, the HDD uses more power than an SSD.

SSD - With no moving parts, SSD generates no noise.

HDD - With the spinning platters and moving read/write heads, an HDD can sometimes be one of the loudest components in your computer.

HDD - HDDs are usually 3.5" and 2.5" in size for desktops and laptops, respectively, with no options for anything smaller.

Bottom line: SSD wins this category. SSDs are physically smaller than an HDD.

SSD - Because there are no moving parts and the nature of flash memory, the SSD generates less heat, helping to increase its lifespan and reliability.

HDD - With moving parts comes added heat that can slowly damage electronics over time, so the higher the heat, the greater the potential for wear and damage.

Bottom line: SSD wins this category. An SSD generates much less heat than an HDD.

SSD - An SSD is not affected by magnetism.

HDD - Because a hard drive relies on magnetism to write information to the platter, information could be erased from an HDD using strong magnets.

Bottom line: SSD wins this category. An SSD would not be erased by a strong magnet.