A chipset may refer to any of the following: 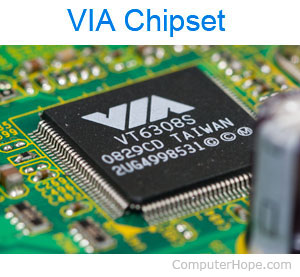 1. A chipset is a set of electronic components on an integrated circuit that manages the transfer of data between the CPU, RAM, storage, and I/O devices. The first chipset, the 82C206, was introduced in 1986 by Chips and Technologies. The original 82C206 chipset included the 82284 clock generator functions, 82288 bus controller, 8254 system timer, dual 8259 interrupt controllers, dual 8237 DMA controllers, and the MC146818 clock. Four of the 82C206 chips were later replaced by CS8221 or NEAT (New Enhanced AT) chipset that contained only three chips. This chipset was then replaced by the 82C836 SCAT (single-chip AT) chipset that combined all the chips in the set into one chip.

Examples of chipset manufacturers include ALi, AMD, Intel, NVidia, SiS, and VIA. These chipsets can include instructions that help control the CPU, PCI, ISA, or USB hardware. They are often divided into a multitiered architecture referred to as North bridge and South bridge, and a Super I/O chip. An example of a recent Intel chipset is the i820 or the Intel 820 chipset.

After reinstalling Microsoft Windows or another operating system, it may be necessary to install your motherboard chipset drivers for all components to work properly. These drivers are included on your motherboard driver CD or can also be downloaded from the motherboard or computer manufacturer.

2. Chips or Chips and Technologies is also a computer company. See the Chips company information page for additional information about this company.