ISA may refer to any of the following:

1. Short for Industry Standard Architecture, ISA was introduced by IBM and headed by Mark Dean. ISA was originally an 8-bit computer bus that was later expanded to a 16-bit bus in 1984. When this bus was originally released, it was a proprietary bus, which allowed only IBM to create peripherals and the actual interface. However, in the early 1980s other manufacturers were creating the bus.

In 1993, Intel and Microsoft introduced a PnP ISA bus that allowed the computer to automatically detect and setup computer ISA peripherals, such as a modem or sound card. Using the PnP technology, an end-user would have the capability of connecting a device and not having to configure the device using jumpers or dip switches.

All modern computers no longer have ISA slots and instead utilizing PCI slots. Below is an example an ISA expansion card and ISA slot it connects into on the motherboard. 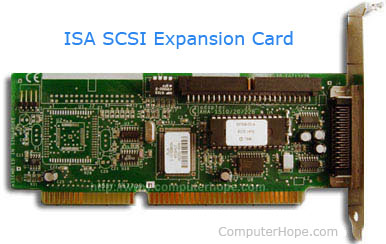 How can I add an ISA card if I don't have an ISA slot?