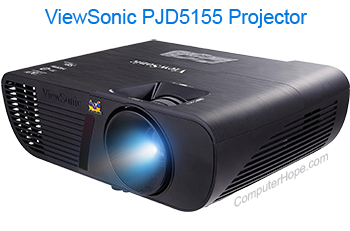 A projector is an output device that takes images generated by a computer or Blu-ray player and reproduce them by projection onto a screen, wall, or another surface. In most cases, the surface projected onto is large, flat, and lightly colored. For example, you could use a projector to show a presentation on a large screen so that everyone in the room can see it. Projectors can produce either still (slides) or moving images (videos). A projector is often about the size of a toaster and weighs only a few pounds.

How is a projector used today?

Below is a list of all the different ways a projector can be used today.

When was the first projector invented?

The first carousel slide projector was patented on May 11, 1965 by a man named David Hansen. The digital projector we know today was created by Gene Dolgoff in 1984, although he came up with the concept for it in 1968.

How does a projector get its input?

Today, most projectors use either an HDMI cable or VGA cable from a computer as their input source.