Alt may refer to any of the following: 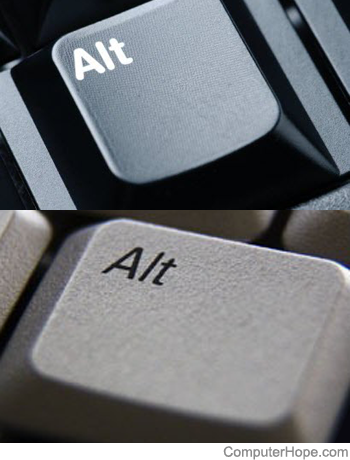 1. Short for alternate, Alt is a modifier key on both sides of the spacebar key on IBM-compatible computer keyboards. The picture shows an example of the Alt key.

Where is the Alt key on the keyboard?

The following image of a keyboard shows the location of the Alt keys, which are highlighted in blue.

Apple computer keyboards use the option key instead of the Alt key.

Alt keyboard shortcuts and what can the Alt key do?

Alt is used in a key combination to perform certain actions, such as accessing the options in the file menu or Ribbon. Refer to the example below:

The combination above means to press and hold the Ctrl, Alt, and Del keys all at the same time. This action opens the Windows Task Manager window or the lock menu to access the Task Manager.

Below are some commonly used Alt shortcut key combinations on a computer in alphabetical order. Clicking any of the shortcut links opens a page for that shortcut with all known programs associated with that shortcut key.

The Alt key is not used as often as the Ctrl key with keyboard shortcuts. If you're unsure about using Alt or Ctrl in a shortcut, start with Ctrl.

See our shortcut key list to view all the keyboard shortcuts.

With Windows computers, Alt can also be used with the number keys on the numeric keypad to create special characters (Alt codes), such as accented letters. For example, when using code page 437, pressing Alt+160 creates an "a" with an accent (á) in all programs.

When using Alt codes, your Num Lock must be enabled, and you must use the numbers on the numeric keypad.

Where is the Alt key on my smartphone or tablet touch screen?

Android and Apple phones, tablets, and other mobile devices with touch screens don't have an Alt key or other modifier keys, except the Shift key.

With a computer on-screen keyboard, the Alt key is on both sides of the spacebar.

2. Alt may specify alternate text as a description for an image in HTML. For example, with the below img tag, the alt attribute describes the picture is the Computer Hope logo. If someone was reading the page but couldn't see the images (e.g., a blind visitor), they could still understand the picture.

The alt attribute should not be confused with the title attribute, which shows text when hovering over an image. See our img tag page for further information about these attributes.