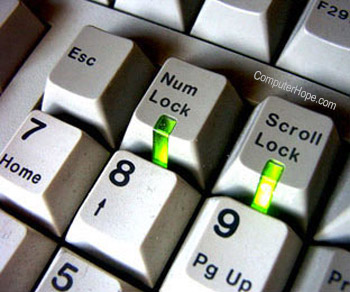 Short for numeric lock or number lock, the Num key, Num Lock, or Num Lk key is on the top-left corner of a keyboard's numeric keypad. The Num Lock key enables and disables the numeric pad.

Some people may refer to the numeric lock key as the number key. It should always be referred to as "Num Lock" or "Number Lock" key. When talking about the number keys on the right side of many keyboards, they are called the numeric keypad.

Where is the Num Lock key?

Below is an overview of a computer keyboard with the Num Lock key highlighted in blue on the numeric keypad.

Where is the Num Lock key on an Apple keyboard?

An Apple Mac computer keyboard with a number pad only functions as a number pad, and has no alternative set of keys as the keyboard shown above. Therefore, Apple keyboards do not have a Num Lock key.

Where is a Num Lock key on a laptop keyboard? 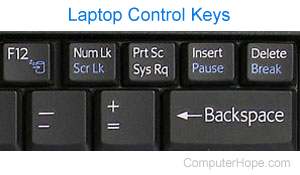 If you have a laptop with a numeric pad, the Num Lock key is in the same location as the keyboard shown above. However, most laptop keyboards do not have a numeric pad to help keep the laptop more compact. Laptops without a numeric keypad have a Num Lock key on another key around the Backspace key as shown in the picture.

If a laptop uses two keys as one key, you must press the Fn key with the second key you want to use. In our example picture, the Scr Lk, Pause, and Break are all blue and a different color than the other keys. To use these keys, press the Fn key and the key with the blue text you want to use. With our example picture, if you needed Num Lock, you'd press the Num Lk key by itself and use Scroll Lock press and hold the Fn key and the Scr Lk key simultaneously.

With PC laptops there's no standard placement for the Num Lock. Your laptop may not have the same configuration as shown in the picture. However, all PCs follow the same steps mentioned above.

How to turn Num Lock on and off

What if I can't find my Num Lock key or it is broken?

Some smaller keyboards, such as those that are on a laptop, don't have a Num Lock key. In other instances, the Num Lock key is broken, non-existent, or users can't find the key. Luckily there is a feature in Windows called the On-Screen Keyboard to help you out.

Why does Num Lock keep turning on?

By default, most computers turn on the Num Lock key each time the computer boots, because it is more likely you'll need to use numeric keypad numbers. For example, if your login password has numbers and you used the numeric keypad to enter those numbers, it would fail without Num Lock being enabled.

The information below is only for keyboards with numeric keypads and doesn't apply to the number keys along the top of the keyboard.