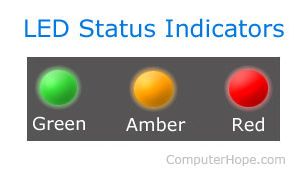 Short for light-emitting diode, LED is a semiconductor that illuminates when an electrical charge passes through it. LEDs are commonly green, amber, or red, but they can be an assortment of other colors as they've become popular with case lighting. Below are examples of how an LED could be used with a computer.

Many computers automatically enable the Num Lock when the computer boots to help prevent problems with using the number keys on the numeric keypad for passwords.

How to turn and off the keyboard LEDs?

To turn on and off (enable and disable) the keyboard lights, press the Num Lock, Caps Lock, or Scroll Lock key on the keyboard. Keep in mind that the keyboard LEDs are not the same thing as a backlit keyboard, where all keys have a light beneath them.

Apple keyboards and some others have the Caps Lock LED indicator on the Caps Lock key and may not have other indicators because there are no Scroll Lock or Num Lock keys.

What are the symbols next to the LEDs?

Most computers today use an optical mouse, which is a mouse that uses an LED to help track the cursor on the screen. 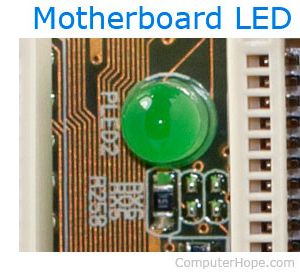 Many motherboards have an onboard LED that lets users know the motherboard has power. The LED may also be used to let users know if there are errors. The picture is of an LED/PLED located between the PCI slots on a motherboard.

Do not work inside a computer or disconnect any internal plugs while this LED is lit.

When the power cable is disconnected from the computer, the LED light stays on for several seconds and then slowly fades off, which is normal.

Motherboard with an LED number

To find the meanings of these LED numbers and letters, reference your motherboard manufacturer manual.

The LEDs on a network card, network switch, and network router indicate when a connection is made and when data is being transferred. For example, without a cable connected to a network card, it shows an orange LED or no LED. However, when a cable is connected, the LED lights up as a solid green LED. As the card is used (e.g., browsing the Internet), data is sent to and from the network card, and the LED flashes to indicate communication.

With laptop batteries (e.g., Dell and Lenovo), a blinking or flashing LED light that's green or orange indicates there's an issue related to the battery. When this happens, there's usually a problem with the laptop motherboard (power interface board), cable, or battery.

There's no standard for indicating the status of a battery using LEDs, but many companies follow these de facto standards.

If these de facto standards do not help you identify what your battery LEDs indicate, review the product's documentation for the exact meanings.

Computer floppy drives and CD-ROM drives have front LED indicators to indicate that data is being read from or written to these media. When the drive has no media or is not being accessed, no LED is illuminated. However, to determine if there's media in the drive, the computer must attempt to read the drive, which causes the LED to illuminate. An example of when this happens is when you boot the computer or open File Explorer.

Hard drives have no LEDs on them. However, the motherboard sends signals through system panel connector cables, causing an LED on the front of a computer to flash when active. When you're running anything on the computer, this LED may blink quickly to indicate data is being transferred to or from the hard drive. For example, as your computer boots, this light blinks as information is loaded from the hard drive.

Printer, speakers, monitor, and other devices

External devices that require power (e.g., monitor, TV, printer, or speakers) also have an LED indicator to indicate when the device is on, off, or has an error.

There are only de facto standards when classifying the meanings of an LED's color. Below are explanations of what an LED and its color may mean.

A solid green, blue, or white LED on the front of a computer, monitor, or another device is often an indication of power. For example, when you press the power button on your computer, if the computer is getting power and is working, the light should illuminate and stay solid.

A blinking green, blue, or white LED is an indication that data is being transmitted or the device is working.

Most blinking LEDs, regardless of the color, indicate that something is working, being processed, or that data is being transferred.

A solid amber or yellow LED often means the computer, monitor, or other device has power, but is not getting a signal. For example, a monitor displays a yellow LED with no display or a black screen when the data cable is disconnected.

Amber or yellow LEDs indicate that data is being transferred over a network card, modem, switch, or router. In the case of a router, this light may also blink so fast sometimes that it may appear to be solid.

A red LED is often a method of notification or alert. For example, on a surge protector or UPS (uninterruptible power supply), a red LED indicates that surge protection is working and available.

A blinking red LED is often usually only used as an alert to notify the user that there is a problem.